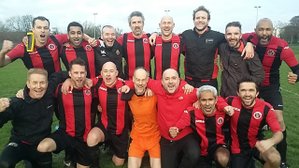 With 10 men we battled to deservedly win a tough match

The V's vets put in a tremendous performance to deservedly beat the much fancied Rustington vets 1-0, with an acrobatic bicycle kit from our mercurile midfielder Tony.

The game started positively, with the V's kicking up the BACA slope but with the wind behind us. We opened up the Rustington defence in the first five minutes only for Tony to smash the ball across the face of the goal onto the post. There was much shouting from the Rustington touchline, as they have been used to winning and this attack seemed to be an an affront on their team. We of course expected a physical game, as Rustington are a solid bunch of blokes not frightened to go into a tackle, but they seemed taken aback that we were matching them and actually stronger than them in this department, as our defence, which was outstanding and out midfield broke up play and put in equally strong challenges.

The Rustington formation was an interesting one, 3-2-3-2 but ultimately it resulted in a long ball into our box.It was a tactic they didn't change the whole match which proved their undoing as our defence headed away every ball and cleared every attack.

In midfield we were showing more subtlety and looked dangerous on the break with Tony in particular linking up well with big Stu who just about fit into the V's shirt he was wearing. Rustington are a good side so we expected them to have some decent opportunities but John's handling in goal denied them any rebounds and his bravery eradicated a potential opportunity. Although Rustington had the majority of possession and despite hitting the bar we looked comfortable and were taking advantage of their vunerability in full back positions and were playing the more incisive football.

The challenges were flying in from both sides, who says that vets football isn't competitive, and on a yellow card James Emmerson flew into a challenge to get his second yellow and marching orders. On another day he would have got a warning however he walked off remonstrating with himself, the ref and the opposition. This looked like it would be a turning point in the match as Rustington are a fit and hard working team so the extra man was potentially going to tip the balance but the V's didn't let this set back upset them and indeed we went 1-0 up after a lovely footballing move which resulted in Tony performing a beautiful overhead kick, to accurately send the ball into the top corner.

Half time and we were 1-0 up. Chris focussed the players and told them to dig out a 1-0 win and it was our day. kicking down the slope but against the wind the second half panned out much the same as the first half.

Rustington naturally made space at the back as we sat with 10 men but continually launched the ball either off the pitch or onto our defenders heads. Nick came on up front for Stu and seemed to upset their defence as he chased them down, held up the ball and basically was a pain in the back side. From a free kick the excellent Adam Spragg drilled in the ball which Nick met with his big bald head and powerfully propelled onto the post. It deserved a goal but bounced out.

Rustington with the extra man were throwing bodies forward but as often happens this means their are too many players in the way so they found it difficult to get any shots away on target. A series of corners came to nothing and despite their best efforts I think they realised this wasn't going to be their day.

The whistle went and Rustington players to a man, wished us the best of luck in the final. What a performance by the players, masterminded by the determined Chris Foulerton who showed great leadership to drive us to this victory and a cup final.

The final will be a tough challenge which I'm sure the squad will relish.