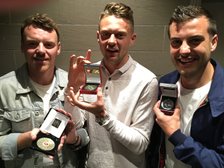 V's finish 3rd in the league, as Bexhill lose

This is a bit after the lord mayor's show as my memory, which is not the best, will struggle to remember what happened a few weeks ago.

We had our end of season function at Concorde 2 the night before the match which probably wasn't the best decision I've made as chairman. The Brian Clough method of team bonding. he famously took the Forest players out drinking before their league final. The night was a success and it was great to see awards given out to our ladies team, the mens teams, vets and U18. We of course celebrated and the whole squad was in full training still as 3pm and some much later.

I woke in a haze saturday morning, with that dry bottom of the parrot cage feeling in my mouth and was thankful that my playing days are over, as the thought of putting on kit and trying to play was abhorrent. I arrived at the Withdean and had a roast dinner which I immediately regretted, not because it wasn't tasty, which it was, but because my body simply couldn't take it. West Ham beating Spurs engaged my brain and I meandered down to the pitch to see the lads warming up and looking remarkably fresh. Bryan as usual was driving the boys hard in the warm up and on a glorious sunny day I was looking forward to the game. I noticed Ollie Blackman was missing and then he duly turned up, looking somewhat disheveled but with a smile on his face and a twinkle through half cut, blood shot eyes. I can't for the life of me imagine why?

We had a chance of coming 3rd if Bexhill lost and given they were away at Mile oak I fancied our chances. Mile Oak have been the in form team over the last 2 months and getting a result at their patch is always a challenge.

Ollie now had his kit on and intimated to me that he was well and truly... and didn't know how long he would last. He was now sweating quite a lot and shaking somewhat as well.

And so to the game.The Withdean pitch was looking past it's sell by date (a bit like Ollie) and was rock hard, so it was very satisfying to see the team play such good football. The details of the half escape me but we went in 1-0 through a reliable source, Matt Waterman. At half time it's safe to say Ollie was hanging but had played suprisingly well, given he would have failed a breath taste. Hailsham equalised but we quickly responded from a corner with that man Ollie Blackman powering a trademark header into the bottom corner. This however seemed to have a negative effect on his body as moments later he was carted off the pitch feigning an ankle injury... remarkably he ran in under 4 hours in the London Marathon the next day.

We took control of the game and the magic moment was when Kev Keehan, playing with all the enthusiasm of an 8 year old in the playground, took on 5 players rampaged into the box and unselfishlessly passed the ball to Pearlo who despatched the ball for 3-1. There was still time for Matt to get one more goal for a season total of 38 goals and league top goalscorer.

Mile Oak beat Bexhill, so we ended up in 3rd place a position which hopefully guarantees us a place in the FA Cup for the first time.

It's been such an enjoyable season led by Kev and the players and backroom staff are all to be applauded. We hope to go two places higher next season and win the league but it will be tough with the teams coming down and the likes of Littlehampton, Mile Oak, Selsey and Bexhill improving. Thank you to our sponsors and supporters and everyone who has helped us enjoy and very rewarding season.