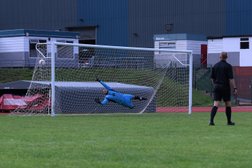 A hard fought draw against an experienced Wicker's team

This was a well earned point for both teams although Wick may feel aggrieved that didn't get all three points. It was our first home match of the season and we went into the game knowing this would be a tough encounter as Wick have a squad, and management team, full of experience and know how.

You can imagine after the excellent performance against Crowborough last week in the FA Cup, the team talk was not to rest on our laurels, to work hard, and be prepared to battle for the right to play our football. After 20 minutes Kev must have been wondering if the players had taken any notice, as from goalie to forward we looked lack lustre, were not working off the ball hard enough and our basic passing game left a lot to be desired.

This is not to take anything away from Wick who played an attacking wing back formation, with our back four often having to all man mark and deal with players running on from midfield. The first 30 minutes was all Wick, whose pressure deserved a goal but their delivery into the box often sailed beyond the far post and proved their downfall to not creating clear cut chances. Their winger took a blow from a robust headed challenge from Lol Edwards and had to leave the game with a blue bandage wrapped round his head. From the resulting corner a header looped back across the goal and hit our bar. A close call. The last 15 minutes we woke from our apathy and began to play better. Wick with their formation 5-3-2 formation were exposed in the full back positions, as their wing back pressed high, but too often we didn't switch play to exploit this weakness. When we did get in a position our delivery was poor both from open play and free kicks. So all in all a half to forget, as both teams gave away too much possession but at 0-0 we were the happier side.

Kev kicked a paper cup across the changing room at half time which to be honest was the best pass we had made in the last 45 minutes. The players knew they hadn't performed and after encouragement from Kev and a few tweeks, to counter Wick's formation, we went out to make amends.

Immediately we looked a different team as players worked harder off the ball, moved it more quickly and we began to look more cohesive however, Wick, although not having half as much possession, were also dangerous but they didn't seem to have the same energy levels as the first half. Stevo came off the bench to give us more stability in midfield which allowed Joe Keehan to press forward more. With the game seemingly drifting to a 0-0 draw we were awarded a penalty for a push on Matt Waterman from their goalie. I've seen them given, and I've seen them not given, so we gladly accepted but it seemed harsh. Joe Keehan belted the ball into the top corner to give the Wick goalkeeper no chance. We then followed this with a period of play when we looked likely to seal victory as Joe hit a couple of pile drivers, one blocked, the other grazing the bar. Matt Waterman who was having a personal battle with Mark Knee, fired a shot into the side netting from a tight angle.

Josh was sin binned for dissent and the ref Darren Eaton seemed to be on the edge of his man management skills as a few decisions were leaving everyone perplexed most notably a scuffed shot from Fordy which clearly was a goal kick and we were given a corner. Judgements like this then tend to undermine every decision correct or not as players become frustrated. The game was by no means dirty and the players seemed to be getting on with the match but too often it was disrupted by decisions that meant the game was a bit stop start. However, as they say, who would be a ref and they get more decisions right than wrong but of course we focus on the ones we disagree with.

While Wick can feel aggrieved at our penalty, we didn't have to wait long before we suffered the same fate. To be fair, leading up to their penalty, Wick had applied pressure on our goal hitting the post with a far post header when it seemed easier to score, skying a shot from point blank range and also causing Bradder's to make a sharp save to his right from an angled shot. That wiley old fox Terry Dodd came on and won a penalty with the dark arts. After backing into Ollie, Dodd's then fell forward from the slightest of touches, the oldest one in the book, and a penalty was given. Ollie was perplexed and told the ref who sin binned him. The penalty was tucked away. 1-1.

So again down to 10 men for the last 8 minutes, we managed to hang on to draw but not before the ball ricocheted around our penalty box like a pin ball machine hitting about 5 of our players after several attempts at goal and an athletic save to tip the ball over the bar by Bradder's. The ref blew the whistle, which I think was to his own relief, as much as ours and the spoils were shared. It wasn't the greatest of spectacles as both teams had moments of high quality along with inferior quality while the tempo and flow of the game was disjointed. Overall a disappointing display from the V's, a poor first half, a better second half and we move on.