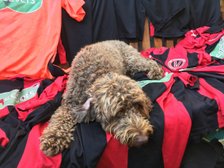 The spoils shared in blistering heat.

Another hot day to play football and after our cup win on Saturday a few of the players were feeling a bit tight and had to be ironed out by Joanna on the physio table. Lol Edwards said he felt like the tin man but when he turned up looked more like the scarecrow

Bexhill have had a faltering start to the season but with much the same squad as last year we knew they would be targeting this match to get their season kick started. With Alfie and Fordy away we brought in Dan Barden at right back and Ollie Stevenson into the midfield.

The game started probably as predicted with Bexhill full of energy and vigour, having not played on Saturday, while we looked to be a step behind them and lethargic and so it proved when we failed to close down Shonk on our left who then whipped in a cross that sailed over everyone into the net. It was a tame goal to give away and Bradder's was upset after the match but he saves us so many times, it was just one of those moments.

Credit to the lads as they didn't let this effect them and we then proceeded to play a very good half of football but didn't manage to find the net. Our passing through the midfield of Lol, Stevo and Joe Keehan was excellent and all round the park we let the ball do the work which seemed to take the sting out of Bexhill's game as they chase around in the swealtering sun.

Bexhill have quality around the pitch and counter attack very quickly but our defence marshalled by Charlie Farmer and Ollie Blackman dealt well with their attacks. Their left winger, who is a talented footballer, was causing us problems but Dan Barden stuck manfully to his task. They had one chance from a corner as a header went quite close but apart from that nothing clear cut.

Our best chance of the half fell to Matt Waterman after a great run and pull back from Josh Gould, but the bobbled on the edge of the six yard line and Matt shinned his shot. Towards the end of the half Josh was sin binned something we really need to get a hold of for some back chat to the ref.

At half time the team felt we could go out and get a result and tired legs suddenly had a spring their step, as we started the second half very positively with incisive passing that was opening up the Bexhill midfield. A lovely patient move finished with a curling cross from Ollie onto the reliable Charlie Farmer who headed home from 6 yards out. We quickly followed this up with a penalty, after Matt Waterman was brought down. Joe drilled the ball into the bottom corner for 2-1. Joe was nearly released again by Matt inside the area but the Bexhill defender just got his toe in as he was about to pull the trigger.

Bexhill then had their best period of the half forcing a couple of corners where headers were glanced over the bar and a couple of powerful shots was well saved by Bradder's making amends for his earlier mishap. Shonk moved more central and immediately had effect as he danced through a couple of challenges drove into the area aand slotted in Connor Robertson who finished clinically into the bottom corner. 2-2. Bexhill sensed victory with still 10 minutes remaining however we got back into our passing game and began to look the more dangerous. In the dying seconds Matt received the ball dipped his shoulder went past two defenders and was brought down on his standing leg. Penalty. Ah but no the ref didn't see it that way and the Bexhill defender said to Matt we got away with that one. That proved to be the last action of the match and the ref blew his whistle.

We were deflated as the performance deserved all 3 points however this is not to undermine Bexhill who are a quality team with some real threat especially in wide positions and I expect them to be in the top four by the end of the season. They didn't give up and certainly contributed enough to the game that they will feel their point is justified. It's fair to say the game was of top quality and a credit to both teams.

The league this season is different from the previous one and already their are 8 or so teams who will fancy their chances of competing for the title, so unlike last season where Alfold and Steyning dominated, I think more teams will take points off each other. Let's see where we are after 10 matches when the results pan out.

In the meantime, it's back to cup football and the FA Vase this Saturday v Loxwood. Tomorrow at 1pm we will be looking at the FA Cup draw but will soon be concentrating on our league matches which is our focus this season.

I washed the kit this afternoon and Dexy my dog crashed out on it panting which I imagine what the players did at home as they have put in two serious shifts in blistering heat. Training is still on this Wednesday!