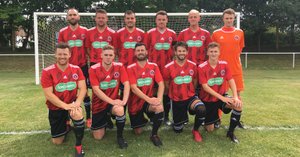 Tea cups across the dressing room

After the glamour of Tooting away in the FA Cup, (if indeed travelling to Tooting can be glamorous) we had a midweek game away at Hailsham. You can imagine the team talk about 'getting up' for the game, starting quickly and imposing ourselves on the match. Unfortunately this didn't transpire as we produced the worst half of football I can remember in 2 seasons. It was like a scene from the body snatchers. It was our players on the pitch but they were possessed by other worldly beings who had not played football before. Our passing was atrocious, our attitude lack lustre, our discipline all over the place. Only 3 players came out with any credit and they were the youngest in the team.

I've said it before the standard of this league and indeed Sussex football has gone up this season and you can't expect to turn up put in a mediocre performance and think you will get anything from the game. Hailsham are a young, energetic, hard working side with some quality players like Connor Thompson and they completely outplayed us and deserved to go in 1-0 up at half time. Quite frankly it could have been more.

The players must have expected a grilling and they got it in spade loads.

All credit to them they responded second half and put in the sort of display we would expect in 90 minutes. Matt Ford cut in from the right to drill a shot through a sea of legs which found its way to the goal on the hour and in the last 5 minutes from a short corner, Josh Gould who had played well all game, slung in a cross which Ollie Blackman headed in for the winner. Hailsham still had some chances second half but Tom Bradford was at hand to make a couple of very good saves.

Hopefully a lesson learnt by the players as we came away with all 3 points.