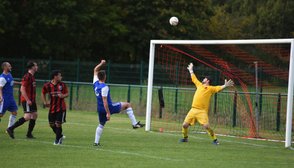 V's win 6-1 away at Billingshurst FC

Another 3 points as we climb the league

Another convincing display against a Billingshurst team that looked short on confidence. After Ollie Stephenson fired in our opening goal into the roof of the net their was only going to be one winner. The match was notable for a hatrick by Joe Keehan. His first goal in the 30th minute was a gem as he shimmed past two defenders and then struck a powerful shot into the top corner. Although we were dominating play we lost our discipline in the later stages of the first half, with too many balls aimlessly thrown into the box and Kev's half time talk focussed on moving the ball quickly out wide and getting our passing game going.

This provided dividends as Joe scored another 2 to complete his hatrick and Scott scored our 5th. It was good to see Dom Hemblade come on as a sub, back from an ankle injury, and get some minutes under his belt and score a goal all be it after a few richochets. We unfortunately conceded a late goal but I have to say their number 9 deserved his goal as he was a constant menace throughout the game and didn't stop working. So a convincing 6-1 win. It's good to get the points on the board and be in the top three but we are under no illusion that this will be an easy season with some challenging matches coming up against some strong sides. However, it's satisfying to win these games convincingly, as last season we didn't manage to achieve this for some reason and indeed came unstuck as we didn't finish teams off that we should have done.