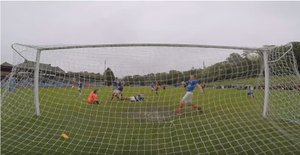 A top quality game that was a credit to the league

Both teams came into the match on the back of some convincing victories and it was with great anticipation a healthy crowd watched from the stand at Withdean, and the game didn't disappoint. Neither team dominated the opening 20 minutes as the game ebbed and flowed with some competitive challenges and good passing football from both sides. The first real chance of the game fell to Matt Waterman after a delightful chipped pass over the 'Marigolds' defence from Josh Gould which Matt ran onto to strike early with his right foot ,only to be thwarted by a sharp save.

Both sides were moving the ball about crisply and the game was being played in a competitive but fair spirit. After about 20 minutes a whipped in ball from the right was helped on by Harry Russell who guided the ball into the back of our net. 1-0 to Littlehampton. The reaction from the V's was positive as we had our best spell of possession which culminated in a free kick on our left. Josh Gould delivered a dangerous cross, which eluded the Littlehampton defenders, for Matt Waterman to stick a boot out to loop it in the air, Scott Packer was the first to react and made a backward header which lobbed the goalie. Deliberate or fortunate? Either way it was a great time to equalise. Joe Keehan, who was having a great midfield battle with their number 8, ghosted into the box and met a Fordy cross at point blank only for their goalie to parry away for a corner. Unfortunately Josh Gould, came off injured which was frustrating for him, but gave another opportunity for Dom Hemblade to stake his place in the team.

It had been a pulsating half and as we walked out for the next 45 minutes I mentioned to Littlehampton manager Mark Bennet, that I thought we might both remain unbeaten at the end of this game. And so it proved, as the second half equalled the first half not only in quality but also in the number of goals. We had the better of the first 25 minutes as Joe, Ollie Stevenson and Arnie began to win the midfield battle. Our defence was dealing well with Littlehampton's attacks with Packs and Alfie limiting the crosses coming in from out wide and Ollie Blackman and Charlie Farmer both having solid games in the middle of defence.

We broke the deadlock on the hour as Waterman held the ball up front for it to be then fed out to Fordy on the left, who crossed the ball for the on rushing 'Packs' to slam it into the back of the net. Of course Littlehampton Town responded, but we stood firm, and also nearly put the game beyond their reach when Joe Keehan thumped a shot against the bottom of the post. With time running out Littlehampton had a great opportunity with a one-on-one against Bradder's but he did well to delay their forward and then Scott Packer, who was having a tremendous game, cleared the follow up shot off the line. We began to feel we could get all three points, despite the increasing pressure we were coming under as Littlehampton threw players forward. However, we conceded a corner which was expertly delivered for George Gaskin to flick home at the near post for a well taken goal in the dying minutes. Sometimes you have to hold your hands up and say well done good goal (through gritted teeth). Their players celebrated enthusiastically to say the least , which immediately made me think how far we have come as a club from the mid-sussex league six years ago to be competing and playing at this level against a club like Littlehampton Town.

Both sets of players were applauded off the pitch by the crowd. Wayne Webb officiated well, supported by his assistants, and let the game flow on a slippery surface. We now focus on a tricky mid week game away at Mile Oak which is always a challenge but hopefully the squad can deliver another good performance.