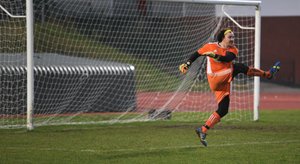 It was good to see Matt Waterman back in the red and black shirt at the Withdean for his first home match , after an absence of a couple of months where he enjoyed a well earned break to Australia. To have our talisman striker back at this time of the season is like having a new signing.

Hailsham Town were playing us after recently beating Wick 4-2 but their form has been unpredictable and we went into the game in a confident mood. One of the linesman didn't turn up and as a qualified ref I stood up to the plate and grabbed the flag, which I know sounds odd to players but I actually enjoy. Ref Bryan Sumner is one of the best in our county and made me feel at home and part of his team.

New signing Christian Weatherstone from Haywards Heath came in for Charlie Farmer and ever reliable Stevo also dropped in to the back four for the suspended Ollie Blackman. The team put in a solid performance and won the match 3-1 with goals from Lol Edwards, a superb edge of the area volley, and a brace from Matt Waterman who didn't disappoint upon his return. We conceded a late goal as Ellis Webster tucked away the ball past Matt Gotel with Alfie Proto-Gates just keeping him onside. I should know I was running the line!

Manager Kev Keehan has led the team with determination over the last couple of months and given the players belief in themselves. It's sometimes difficult with matches being postponed to keep the momentum but his enthusiasm is infectious and his demand to maintain a high level of performance has meant we have put alot of points on the board.

This week we decided to lay some new turf in the penalty areas as we have a three week window, so thanks to Lol Edwards for doing this work. It's no guarantee we will get every game on but at least it gives us a better fighting chance.