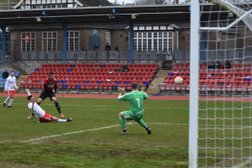 An entertaining game that went the full 90minutes and more...

Despite the Withdean pitch being under water on Thursday, the ground had drained well and all but for a few sticky patches in the goal area, was a very good surface to play football on. Lol Edwards can work his magic both with his boots and with his fork and had worked on the pitch which came to Seaford's benefit, much to everyone's amusement during the game, but more about that later.

Both sets of players and management staff were looking forward to the game, and it's safe to say their was mutual respect between the two clubs and after fist bumps and elbow knocks were made during the respect exchanges, the game got underway with ref Daniel Jeffery in charge. The V's started the game well with some crisp passing through midfield which resulted in our first chance within 5 minutes as Joe Keehan thumped a 25 yard shot against the post with the keeper rooted to the spot. This set the tone for the first 15 minutes as we dominated possession with Josh Gould, who re-signed for the club this week, making some incisive runs from the right and clipping clever balls through to Matt upfront.

Seaford of course had to respond and gradually began to get on the ball more playing a lot of passes down their left flank to Jack Rowe-Hurst who was having a good battle with Dan Turner. They began to assert themselves more and hit the cross bar with a long range effort. With the game becoming more evenly balanced Seaford won a corner, and from the ensuing whipped in cross, Matt Ford headed home but the ref had already blown for a free kick which he said afterwards was for holding onto our goalie Matt Gotel. It seemed harsh from where we were standing, and understandably the Seaford bench were a tad aggrieved, but Jeffery's was adamant.

This decision seemed to swing the emphasis of the game in our favour. Jack Hayward had a great strike that zipped past the far post and Joe Keehan had another shot that came close. We began to look more and more dangerous and so it proved with a lovely move through six passes which ended up at Matt Waterman's feet who turned his defender and shot to finish clinically. Seaford responded with a string of corners which came to no avail despite some excellent delivery. Our open play was a bit more expansive than Seaford's and after another string of passes Jack Hayward neatly drove forward and picked out Waterman who rifled a powerful shot into the roof of the net for his brace. Matt nearly scored a third as he clipped the ball over the on rushing keeper, only for Lol's newly laid plush grass to stop the momentum of the ball for Dan Pollard to clear. A few Seaford players thanked Lol for all his hard work on the pitch which raised a few laughs which was good to see in such a competitive game.

The whistle went on what had been a highly entertaining competitive first half with some good quality from both sides. We discussed at half time the importance of trying to reduce set pieces as Seaford are particularly dangerous from these and to try and control the tempo of the game as much as possible with Arnie, Lol and Joe all playing well through the middle of the park. For the first half hour this went according to plan, as despite periods of Seaford possession Matt in goal wasn't really being troubled apart from one dramatic finger tip save which he tipped onto the underside of the bar. We thought the match was won when Joe Keehan, who has such an influence on the game, controlled the ball in midfield, attacked the space in front of him and stroke a lovely shot that had a bit of fade on it as it nestled into the bottom right hand corner. 3-0 and we celebrated what we thought looked like 3 points.

However! Never relax in football especially against a team who won't give up until the last kick. Seaford's management made a couple of changes which were astute and with a new winger and Jack Rowe-Hurst tucking into the middle the pressure started mounting on our defence. We notably had to substitute Arnie who had been outstanding in midfield but was feeling the effects of his breakfast... 4 sausage rolls and a pint of full fat milk. That will teach him. This compromised our midfield as we had to reset and galvanised Seaford.

After a series of Town corners the ball broke free and was whipped across the face of our goal. Lol Edwards, not realising Jason Sowter was piling in behind him, let the ball run across his body only for Sowter to slide in and force the ball home for 3-1, still with 10 minutes to go. With a long throw in their armoury Seaford hit channel ball and won a string of throw ins which we did well to defend but the pressure was now relentless. Dan nodded a ball back to Matt Gotel, who has been called the cat but unfortunately reacted like Bagpuss and managed to clip the on rushing forwards legs who beat him to the ball for a penalty. Jack Rowe-Hurst tucked away the pen away for 3-2. To be fair to Matt he had kept goal well dealing with most crosses and commanding his six yard area. We managed to defend the last 5 minutes and were relieved to hear the final whistle. I must mention Christian Weatherstone and Alfie Proto-Gates who formed a new partnership as centre halves and looked as though they had played the whole season there together.

It was a cracking game played with good attitude from both sets of players who I'm sure will look forward to the reverse fixture on Bank Holiday Monday, a game worth watching if you want to see two good sides playing entertaining competitive football.