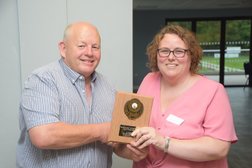 Aldermaston 2nd XV were honoured to receive the award for Most Sporting Team at the recent Thames Valley Invitation League AGM held at Rams RFC.

Aldermaston enjoyed success playing in TVIL South last season against a variety of local opponents in the competition that is more concerned about getting matches played, than following strict regulations.

It was the TVIL's 20th season in existence and is still led by it's founder Eric Moyse.