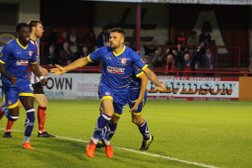 Alfreton Town were once again undone by a late goal, as the Robins snatched the points in a thriller at the J.Davidson stadium on Tuesday night.

The Reds twice came from behind thanks to Danny Clarke's bundled first half effort before Danny East reacted to sweep home in the box in the second half. But the hosts managed to dig in again with what looked like an offside goal to steal the points in what was another strong display from Billy Heath's men.

We started the game once again fairly well with Amari Morgan-Smith holding the ball up well in attack and Ryan Qualter making some early important tackles at the other end. Jack Atkinson was forced into an early save as he dealt with a shot from the edge of the area easily. Josh Thacker's effort was blocked as the Reds looked to respond.

Alfreton had a spell of pressure and won several corners thanks to good work from Josh Wilde and Thacker. The second corner saw Amari lack direction with his header.

Atkinson denied Hulme's near post attempt but with 23 minutes gone and the Reds looking the better team, Connor Hampson had had a deflected volley on the edge of the box that wrong-footed Atkinson.

We responded on 34 when Josh Clackstone kept Wilde's far post cross in play, he hooked the ball over to Danny Clarke who bundled home to give the Reds a deserved equaliser.

The leveller last just six minutes as James Jones restored the lead with a scrambled effort which Morgan-Smith couldn't quite prevent from going in.

Controversy reigned when Clarke was fouled in the area but a free kick was awarded which Bobby Johnson crashed against the post before there was further penalty shouts for handball in the rebound.

The second half started perfectly for us when Danny East reacted quickest in the box to stab home to level the scores yet again for the Reds at 2-2.

The hosts came close on 67 when a cross flashed across the face but Hulme couldn't get enough on the ball to nip it past Atkinson. East then tested Drench with a free kick which the Robins keeper held.

Just when Alfreton looked to be holding on for another fantastic away point, John Johnston a former Red found the net with five to go with what looked like offside in the build up.

It was heartbreak for the Reds yet again in the league after losing late at Brackley. But it was another brilliant performance from the boys who produced some great football but luck wasn't on our side as we narrowly missed out on points again.

We'll look to continue the good displays when Bradford (Park Avenue) visit the Impact Arena on Saturday, kick off is 3pm.