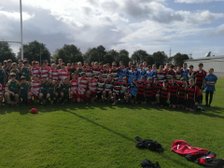 Fun afternoon as the sun shines on the Kelpies

This weekend also saw a return to action for both our U14's & U16's sides playing at Falkirk and Grangemouth respectively.

Our U14's, some of whom are new to club rugby started off strongly by beating a well drilled Stirling County side by two tries to nil before being narrowly beaten by Carnoustie and the Kelpes. For the 1st game of the season the boys showed great skill, commitment and determination. They were a credit to the club and I hope they enjoyed there 1st outing of the season

Our U16's, Narrowly lost to another Stirling County side before going on to record impressive victories against both the Kelpes and a combined Blairgowrie/Carnoustie team. Again the level of performance and commitment from the boys was excellent and sets them in good standings for a successful season

A big thanks once again goes out to the all the Players, Coaches and Parents who once again turned out to support and ferry the kids to and from all the games.