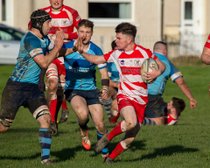 Alloa posted their first league win of the season on Saturday against stubborn opposition on what was not an ideal day for rugby.
With the wind at their backs, it was the visitors who were on top of the early exchanges, dominating both territory and possession. So it was no surprise when they opened the scoring after 15 minutes. What was surprising was that they missed a simple conversion straight in the front of the posts.
Despite this early deficit, the home side ground their way back into the game and when Lee Cairney was set free wide on the left he powered his way through a number of defenders to level the scoring. The rest of the half was a fairly even event with both sides trying to keep the ball in hand, which maybe was not the best plan given the extremely cold and wet conditions which made this type of game plan difficult to execute.
With the score line still level after the break, Alloa adapted better to the conditions trying to pin the visitors deep in their own half with some strategic kicks harnessing the wind advantage.
For long periods the home side were camped on the Blairgowrie line but some poor handling and decision making coupled with a well organised defence kept them at bay. However, Alan Keir did cross the line, following a nice handling move from the Backs, but he was adjudged to have knocked on the process.
But Keir was not to be denied a score when moments later he raced on to a clever David Jess chip, which caught the visitors defence flat footed, and the pacey Full Back made no mistake this time to seal what was the winning score.
The remaining ten minutes was a nervy affair for the Earlsfield crowd as the visitors had one last throw of the dice, but the home side defence stood up well to what was thrown at them and were deserving winners at the final whistle.
Alloa now travel to Ellon on Saturday – 2pm KO.