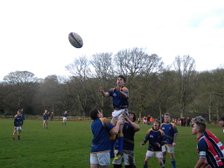 A Great Start to the New year

Once again Alnwick found themselves with a reduce squad with 5 players unable to attend, either due to illness, family commitments or holidays in the Sun, but despite this we still fielded a squad of 18 demonstrating the depth we now have in our team. The Northern coach commented before the game, that he had heard that Alnwick had improved a lot, and he recalled our last encounter 2 years ago where we had 12 players and were beaten 88-0. With the memory of this defeat firmly in the heads of some of our longstanding players, it looked, at first during the pre-match warm up as though Alnwick had turned up to just go through the motions, and had already lost the game before we had started. Frustrated, the coaches marched the lads back into the changing rooms and, 're-focused' them a little. Thank goodness the lads rose to the challenge and decided to give it there all. We conceded the first try to Northern early on after a fumbled catch from the kick off and Alnwick had no possession allowing Northern to keep working the ball until they got over the line. There were already positive signs from Alnwick, but the planned blitz defence wasn't being executed well. However that all changed and what followed was a real turning point in the game. Led by Harry Paul our midfield players started to put real pressure on the Northern backs and we were rewarded with 2 interception tries by centre Josh Lowes, this lifted spirits across the pitch and then we watched a great game with 2 well matched sides battling it out. Northern regained the lead despite a great try from Hayden English who had worked hard all through the game and reaped the rewards for his efforts. Well in to the second half now and Northern were 2 tries ahead. Alnwick never gave up and soon they battled up the field with great support play putting Jack Tuczemksyi in for his first ever try. There were now 7 points in it with minutes to go and Alnwick came back hard again. Great running and offloading up the right wing allowed new boy Isaac Girera to power over the line and was very unfortunate not to score but an experienced Northern side got under the ball and held him up. When the whistle went there were smiles all round, as everyone new they had fought hard and played well and there is no shame in losing if you do that.

Special mention to Isaac and Reece who both had an excellent game and were singled out by spectators for their impressive tackling.

Big Don's Man of the Match:
This week a well deserved MOM went to Hayden English.