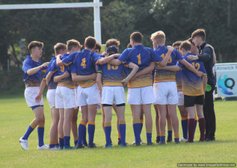 Ryton were Right On!

As we arrived at Ryton it became apparent that Alnwick were stepping into the unknown having not played at this club for 6 years at our best guess.
With no real idea of what to expect, all were looking forward to a good game of rugby in beautiful weather, and the hosts bacon butties were a great start to the day.

What followed was a very hard first half, receiving the Kick off with the sun in their eyes Alnwick failed to catch the ball and Ryton were immediately putting pressure on Alnwick, Harry Paul recovered the situation by touching the ball down, but the 5 meter scrum that followed showed us what Ryton were planning to do, and did well all day, moving the ball deftly through the hands of their backs to make the first score.

This was to be the pattern throughout the half, and frustration started to set in the Alnwick ranks. Ryton were good at quickly recycling the ball from half tackles in the forwards and then flooding their back line with surplus forwards while Alnwick were sucked in leaving themselves short on the wings.

After the first half, the score was such that we needed to re-focus and the coaches told the boys to forget it and treat it as a training game. - 'What are Ryton doing to us?, How do we combat it?, where are we going wrong?' were the questions we asked the players, and sure enough they new the answers. So let's sort it this half - and on the whole they did.

A team like Ryton will punish mistakes and they did in a big way, but some key areas of play showed real promise. The Alnwick forwards started winning and retaining possession at the breakdown as the forwards competed more quickly. A change in tackle technique saw us taking the bigger boys down with chop tackles rather than being bounced off them as we had in the first half. The wings started to trust their inside men and stayed out wide preventing them from running around us, a perfect example of this was displayed by new boy Will McDougal who played his position with great composure. These are all things we can improve upon but to do it in the match under that much pressure is difficult and Alnwick did not shy away from the task.

It's not the best performance we have given, but the quality of the opposition certainly made it look worse than it was, so let's move on, learn from it and be better prepared for next time.