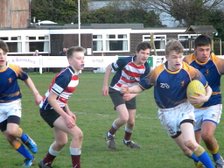 A Game of Three Thirds

It is not often you get a chance to play the same team again so quickly, but that is what we had today, with the recent merger of the Ponteland and Morpeth U15's we effectively faced the same opposition as we played 2 weeks ago but this time in Morpeth colours.

After our last encounter we have worked hard on the areas where we let ourselves down, particularly around the rucks for the forwards and keeping a strong defensive line in the backs. After Morpeth put 2 tries past us in the first 10 minutes, making use of their lightning wing it looked like history was going to repeat itself, but then you all re-grouped. You recognised the threat on the wing and started drifting well to get the numbers in defence - you didn't break your line in the backs, and this paid off hugely throughout the game keeping Morpeth at bay for now. Then the forwards did their bit, after the game the opposition coach complimented you for your commitment to the ruck, 'you put the right level of commitment in to win the ruck, but not too much and that gave you a real advantage', and it certainly did as you sucked in the Morpeth defence creating the space and the momentum needed to let you even the score with 2 well worked tries. Scores went back and forth and at the end of the second period of play we were well in the lead. However we had agreed to play 3 periods to make substitutions easier, both teams having large squads.

A combination of fitness on your part and a better team effort from Morpeth allowed them in and with 3 minutes to go Morpeth had a 3 point lead. Next try wins!

Sadly it ended with Morpeth running in a try with little effort as 3 of our players were busy swapping handbags with a Morpeth player who allegedly had done something untoward, whatever the case, he certainly did his team a favour as our defence was nowhere to be seen.

What to make of all this? I was extremely proud of the way you all played, how you have taken on board the advice from the coaches and the work we have done together and put it into action and the results speak for themselves. This certainly bodes well for our tour at the end of the season. However we cannot ignore some of the unacceptable behaviour yesterday, and players need to remember that while engaging in petty squabbles and other unacceptable displays of behaviour, you are only thinking about yourself and not your team, a lesson I think was well learned.

On the whole though that was not the case and everyone of the players played for their team mates, and committed 100% and for that reason we are not awarding a man of the match - the whole team are to be congratulated.

Well done Lads - Novos next week - anything is possible!