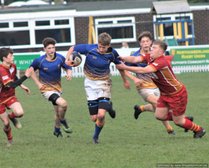 Alnwick U16’s carved out a good win in a highly competitive match against our good friends from Rockcliff.

Alnwick U16’s eventually came out on top with a solid 14-10 win against Whitley Bay Rockcliff in a highly competitive match that could have easily swung either way. The forwards were front and Centre with a tough contest in the scrums giving away a lot of weight. But we learnt as we went and started to gain some stability in the second half. Great start in a tough game for our new hooker Ryan and great to see Edward in his first match after 20 months! To renew his second row partnership with Dan.

We managed to put in place training from recent weeks which is always great to see from a coaches perspective. The aim being to see our powerful forwards carry more to draw in their defense and do give out backs more space when we go wide. Our movement of the ball in the backs was key, allowing space for our fast lads, who really do have some wheels!

The difference in score at 2 tries each all came down to our conversions. Thankfully Cillian definitely had his kicking boots on with two challenging conversion kicks. The first going over after coming off both posts!

Well done to every single player. We are finding ways to control a game and come out on top in close contests like this which is great to see. Very entertaining rugby and solid defensive work.