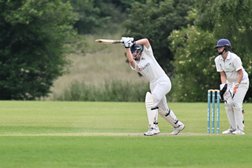 Alton make it 4 from 4 with win against Hursley Park

With both teams missing players the depth of squads was always likely to be tested in this top of the table clash at Jubilee. HP skipper Amy Mistry won the toss and elected to bat, which was fine with Alton, as Nic had planned to bowl first on the used and worn JCG surface. Shameelah Mosley and Sarah Attril raced out of the blocks, ticking along at 5-an-over and it took a straight one from Nic to remove Shameelah lbw and make the breakthrough. Anya Ahl then came in and, after surviving a close stumping appeal, opened up and played some lovely shots, including a glorious straight six. Anya and Sarah saw HP through to drinks before both falling in consecutive overs; Sarah to a lovely catch from Georgia Harsham and the Alton wk Julia Moulton got the stumping that could have perhaps been given earlier as Marshall’s tempting deliveries continued to cause Ahl out of the safety of her crease.

Molly Abley had bowled good lines when asked to open up for the Brewers but it was her sharp fielding that caused a mix up in the HP batting and broke the key partnership between Amy Mistry and Anisa Ansar - Molly attacked the ball and threw sharply to Julia who deflected the ball onto the stumps sending the unfortunate Anisa back to the pavilion. The remaining 15 overs were all about Amy managing the tail and maximising the scoring options. She batted excellently, taking sharp singles and punishing loose deliveries when offered. The Brewers could have removed HP for 20 runs less but for the HP skipper’s excellent batting. The plan was to expose the tail wherever possible and when they were exposed they were unable to cope with the Alton three pronged spin attack. Amelia Marshall and Sarah Murphy picked up a pair of wickets and Gemma Porter cleaned up the tail with her off spin - ending up with 4 wickets, the final one a steepling catch from Nic, who had been a magnet for the ball for the final overs :) special mention to Andrea Vincent who had been drafted up from the softball team to ensure we had 11 on the field.

Georgia Harsham and Gemma P opened the batting for the Brewers and matched the start of HP, also ticking along at 5-an-over. After one close call, the pair then had another mix up which saw Georgia run out - but not before setting a formidable base. Amelia then came in to join Gemma and the Year 11 pair, fresh from finishing their exams, expressed themselves freely, taking quick singles all round the circle. As the score progressed as did the expansive nature of the shots, both bringing up their half centuries with lofted drives. The 115 run partnership was something that a few weeks ago would have been astonishing, but is more-and-more becoming a realistic expectation. The middle order were ready to build partnerships should one of the Hampshire youngsters fall, but this time the opening trio got the job done, winning in the 28th over and securing full points with a 9 wicket victory! Well played ladies....