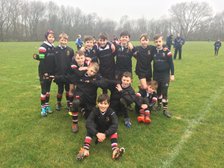 U12s Slip Up in the Snow

Having had to borrow opposition players in recent friendlies, nearly the entire AKRFC U12s squad responded to a call to arms for their Cheshire Plate Preliminary round match against Ashton-on-Mersey.

With snow beginning to fall, AKRFC quickly found themselves 2-0 down with AOM running strongly through the AKRFC tackles. However, the boys regrouped and started to put in some strong rucking. This caused AOM to concede a number of penalties just in front of their try line. AKRFC attacked with Eliot, Sam R and Lonan being used to batter the line. Eventually Lonan made it across but got held up in the tackle. From the scrum, another drive saw Sam R make it over the gainline and score.

From the restart, AKRFC immediately put the opposition under pressure, forcing the full back to kick. It was caught by Tom who punted it back down the pitch. A handling error by AOM gave Lonan enough time to pick up the ball and charge over for an equalising try.

AKRFC were looking good and the scrum was dominating. Unfortunately, despite winning a scrum against the head, a mistake gave AOM enough room to run in another try just before half time, making it a very competitive 3-2 to the home team.

The second half started in much the same way. Both teams were attacking and defending with gusto. Unfortunately, Sam R picked up a hand injury in a tackle and had to retire from the field. Whether this knocked some confidence or rhythm out of AKRFC is hard to say but suddenly AMO were able to run in three tries in quick succession. Heads were beginning to drop and it looked like AMO were going to win the tie with ease.

However, the U12s are made of sterner stuff and were not going to take defeat lying down. With a quarter of the match remaining, AKRFC upped their work rate and started running directly at the AOM defence with real passion and purpose. Lonan was beginning to win every scrum, Sam M was bossing the team at scrum half, Eliot was charging at pace, Ewan and Keiron were tackling hard and AOM were beginning to struggle. During one maul, Louis came out with the ball and a clean run at the opposition’s try line but unfortunately got held up. From the scrum, the ball was passed down the line to Isaac A on the wing. He drove hard at the AOM defence and Isaac P picked up the ball from the subsequent ruck. A few jinks later he was over the line and scored.

Time was running out and despite some very determined running from Tom and a try saving tackle from Caine, AKRFC just couldn’t make up the difference and the game finished 6-3 to the home team.