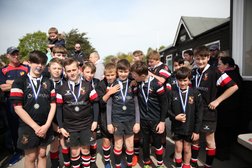 On Sunday, the AKRFC UC12s travelled to the Wirral to play Birkenhead Park RFC in the final of the Cheshire Vase competition.

Play started with Kersal absorbing some fine attacking play by Birkenhead; however, it was the opposition who opened the scoring with a straight forward passing move splitting the AK defence. A second try almost immediately followed as Birkenhead kicked long and the ball was fumbled for what seemed an eternity on the Kersal try line. Fortunately Fin managed to clear the lines with a darting, twisty run, only to be felled by a high tackle three quarters of the way up the pitch. A bit of argy-bargy between the two sides led to a scrum which was won by Birkenhead, who’s scrum half made an exceptional run to make it 2-0. Further pressure saw Birkenhead run in another two, quick tries to make it 4-0 with less than a quarter of the match gone.

For a moment, it looked like AKRFC were going to pieces as arguments started between team mates and there was a serious threat of a mauling. Fortunately Kersal got their act together and there followed some excellent forward play with the ball being driven upfield and a desire to keep the ball alive. Kane was denied a try as his foot went into touch but Kersal kept hammering the Birkenhead line until finally opening their account. After the restart, Birkenhead almost immediately hit back with another meandering run which was only stopped by a thumping tackle by Keiron. This must have roused the troops as Kersal once again attacked the Birkenhead line with purpose; scoring moments before half-time. Birkenhead Park 4 – AKRFC 2.

The second half saw some strong breaks by Connor, only for him to be cautioned for high elbows – he can’t help being tall. The subsequent scrum saw the Birkenhead scrum half once again leave the Kersal defence for dust and score. AKRFC responded immediately with a fine break, pass down the line, ruck and drive over the Birkenhead line for a third try. With their tails up, Kersal continued to attack with Caine only failing to claim a try due to a double movement. However a score was due and Kane smashed his way through the Birkenhead defence to bring Kersal to within one try.

AK worked hard to equalise and played with vigour, only to see the ball pop out on the wrong side of the maul. Birkenhead safely collected the ball and ran the full length of the pitch to score – much to the relief of the opposition’s supporters.

Following the restart, Kersal pounded the Birkenhead defence but were denied as the ball held up on the line. A second attempt was centimetres away from scoring and a third saw Kane being pushed into touch – Kersal could not quite find a way through. The game was finally sown up by Birkenhead as another jinking run breached the AKRFC defence. Final score: Birkenhead 7, AKRFC 4.