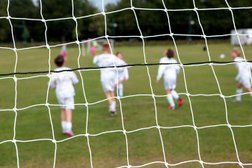 Teams are allowed to train and play from March 29th 2021

The lockdown for grassroots football is over and the Ambleside Utd team have started training this week and are due to play their 1st match this Saturday April 3rd since December 12th with an away fixture at Penrith Academy.
The Westmorland League Committee have decided that Clubs will have too many outstanding fixtures to complete the 2020/21 league program so therefore the season is again curtailed.
To give teams fixtures the League Committee have organised the three league cups competitions to be played on a league basis rather than a knock - out formula. The 3 divisions to be split into two mini leagues ( North and South ) with each team playing the other teams in their section once . This will give each team 5 or 6 games before the top 2 teams in each mini league qualify for the semi finals. Ambleside Utd have been put into the North section in their division which means travelling to Penrith , Appleby and Greystoke while near neighbours Windermere Reserves play all their 3 away matches within 9 miles. The WFA cups are to be played and Ambleside Utd play Langwathby at home in the 2nd round of the County Junior Cup.
Stringent rules are in force for the restart ( NO changing rooms, NO SPECTATORS )
The pitch has been completely flooded twice recently and loads of debris was washed onto the pitch by the flood water , but thanks to the efforts of Dave , Graham and James Horrocks it has been removed and I have been able to trim the grass and roll the pitch.
Hopefully everyone is fit and well and the Club can do well in the cup competitions.
Share via
FacebookTwitter
https://www.pitchero.com/clubs
Recent news