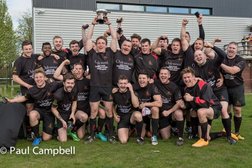 In a superb all-round display, Oakwood sponsored Andover overcame adversity and some tough uncompromising opponents, to run out comfortable winners over Gosport and Fareham at Foxcotte park last weekend.
With Gosport having been in higher divisions it has been many years since the Hampshire rivals met in the league, but after a shaky start, Andover swept the challenge of the South Coast club aside, to emphasise the improvement they have made in the last few seasons.
With late changes due to injury and unavailability Andover had to call on the strength in depth that their highly rated Academy is now providing, and with no fewer than five of last season’s successful colts side on show, they had too much fire power for the visitors.
Debutant second row Callum Smith turned in a powerful ‘man of the match’ performance and Josh Middleton, making his first start also impressed on the wing, with fellow youngsters Ioan Gwynne Davies and Jack Potter belying their young years in midfield.
When openside Fin Waite joined the fray in the second half to add pace to the forward line, the quintet of eighteen-year old’s was complete.
Andover begun the game attacking down the slope in sluggish fashion and despite having plenty of possession made little impression on the visiting defence.
Personal errors and too many penalties ruined continuity and Gosport took advantage to put together a spell of their own.
From a lineout catch and drive on half way Andover left the blind side unguarded and the visitors broke free to score a good try.
They soon added a penalty to take an eight-nil lead on eighteen minutes and Andover suddenly began to wake up.
Three minutes later Charlie Waite reduced the deficit with a penalty won by typically good work from Billy Pollard and then Andover began to take full control.
The Gosport pack was put under constant pressure and began to give away a string of penalties.
From two such chances Kieran Jenvey and Ollie Lindridge both broke quickly and after a series of rucks on the Gosport line, stalwart number eight Simon Preece burrowed over for a try converted by Waite.
Gosport retook the lead with a further penalty soon after, but that was as good as it got for the visitors.
A yellow card for the impressive Potter did nothing to dampen Andover and when two minutes later a Gosport player suffered the same fate for a high tackle on powerful hooker Tom Waite, the writing was on the wall for them.
On the stroke of half time Andover chose to kick a penalty to the corner rather than take three points and the ambition was soon rewarded, as Jenvey scored from the resulting catch and drive with Charlie Waite converting splendidly from out wide.
After the break with the wind at their back Andover piled forwards.
A wonderful kick chase from Evan Roll set up a lineout and from the resulting catch and drive the lively Jenvey was once again on hand to repeat his earlier feat.
With tails up Andover began to use their pace out wide to make further inroads and soon came the try of the game.
Charlie Waite took a high ball and countered from deep before feeding Gwynne Davies. The young half back’s pace and silky skills tore through Gosport before feeding Potter. He sprinted forwards and timed his inside pass superbly to the marauding Jack Stott, who finished wonderfully with Waite converting.
It looked plain sailing for Andover, but then a piece of ill-discipline threatened to undo all the good work. Giant second row Tom Erskine was spotted tripping an opponent by referee Dean Crossley and the official brandished a red card.
Gosport perked up having been thrown a lifeline and as Andover reorganised they scored their second try.
Andover didn’t panic however and when their seven forwards drove Gosport backwards in several scrums, the visitors knew the game was up.
As Gosport tired the Andover backs began to run everything. Before long, more great work from Potter and Roll set Stott away and he again finished superbly in the corner before Charlie Waite struck a conversion that fully matched his effort.
The young ‘All Black’ backs continued to pour forwards and with time running out Middleton was unlucky to have been judged in touch when he looked to have finished a neat Charlie Waite grubber kick.
The Referee was playing advantage however and Waite slotted the penalty to put Andover out of sight.
A late Gosport flourish showed they will not lay down easily in this league, but a final try on full time was not enough to dampen Andover’s Joy.
Afterwards Director of Rugby Andy Waite said ‘We have trained really well for the past few weeks and it’s really starting to tell. Some of what we did well today in defence and attack came straight from practice and that is really good to see.’
‘We fielded our youngest ever back line today who were superb, but I must take my hat off to the forwards and front row in particular, of Alex Hibidge Tom Waite and Nic Reed. Not only did they scrummage brilliantly, especially when down to seven, but they also found the energy to tackle hard and carry with power and intelligence.’
Next week Andover again face Hampshire rivals as they travel to Eastleigh looking to consolidate their improved league position.