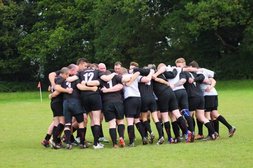 Forwards out of sync as Stoneham take the points

Andover 3s left to wonder why it all went wrong.

On a day when the team sheet looked strong, the performance itself told a very different story. Andover showed very little conviction in attack, defence, team cohesion and a "want to win attitude".

Individually, no one deserves a mention as Andover lost as a team in a game that should've been won quite convincingly. Stoneham narrowly won by 2 try's, but were highly complemented by the home side and took full advantage of the few opportunities they had.

Taking nothing away from Stoneham, Andover played as 15 individual players and allowed themselves to be easy pickings.

Next up for Gillan's 3s, is a short trip down the road to arch rivals Overton! with a sketchy past between these teams, Andover need to focus on just their Rugby and not the mind games. Without their ever present Capt Jason Corney(Injured) reluctantly on the sideline, and VC Paul Gilbert(Eng vs Samoa), the all blacks will look to the teams older heads to step up in what is a key fixture prior to the Christmas break.