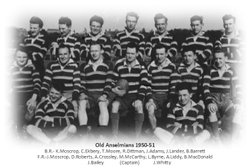 Old Anselmians’ RUFC was formed in 1947 by a group of former pupils of St. Anselm’s College to whom all current members owe a great debt.

Early fixtures were played against traditional old boys’ teams in the Wirral and on Merseyside by a small but dedicated band of travelling players before a temporary home was secured at “Solly Rec” in Birkenhead.

Playing facilities and amenities were primitive and it wasn’t until the mid-1950s that the club relocated to its present home in Eastham village.

Thanks to the far-sighted and generous provision of a few members, the freehold of the pitches at Eastham was secured and a rudimentary clubhouse was begun using the expertise of local businessmen and players. There are numerous stories told of the piecemeal construction of a building that still served its purpose nearly sixty years later.

By the 1960s Old Anselmians was a well-established and thriving club running three sides. At this stage, it was a “closed” club, in RFU language, meaning its players were drawn from “The School” but it was recruiting soccer players from the town presumably attracted by the promise of a more active social life than the football clubs could offer.

Further expansion in the 1970s meant that by the end of the decade Old Anselmians could field six teams playing “friendly” fixtures all over the north-west of England and north Wales.

Entry to the RFU Cheshire Cup competition meant several “senior” clubs visited Malone Field (named after a Christian Brother teacher at the School), with Sale the most frequent opponent. In the 1980-1981 season, the club became the first “junior” club to reach the semi-finals losing narrowly to Birkenhead Park.

In the 1990s, the club’s profile was greatly enhanced by the success of several alumni on the international stage. Austin Healey, latterly of “Strictly Come Dancing”, would go on to win fifty-one England caps at scrum-half, full-back and wing and tour with the British and Irish Lions in 1997 and 2001. In the 1995-96 Five Nations competition, Simon Mason and Christian Saverimutto were capped three times for Ireland. More recently, in 2002, Ben Johnston, the former Nottingham player/coach, was capped twice by England. The erstwhile Newcastle Falcons scrum-half, Chris Pilgrim is the most recent graduate of “The Saints.”

With the advent of,first,merit tables and, now, league rugby, many of our traditional fixtures have lapsed. The “Old” was dropped from the name and “Anselmians” 1st XV competed in the South Lancashire/Cheshire Division One for several years, before spending two seasons in North One West in 2011-2013. The “Crusaders” (2ndXV) and the “Mavericks” (3rd XV) also play in the northern leagues and the thriving mini and junior section is the envy of many clubs.

The club became incorporated as a “Company Limited by Guarantee” on 5th October 2010 and ambitious plans to build a new clubhouse were finally given planning permission in 2018.

Saints were promoted to North One West after a six year absence after a memorable farewell play-off, 65-14 victory against Aspatria in May 2018. It was a fitting end to the club’s 70th birthday season in 2018, and marked a temporary move to Vauxhall’s Sports and Social Club to play the 2018-19 season in the higher league.

When the club returns to a redeveloped Malone Field in 2019, Anselmians will continue to be a friendly and forward thinking club true to the vision of those young men who began it with the simple wish “to play rugby with a smile.”