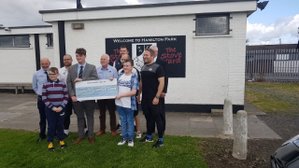 On the 10th August 2019, 25 members of Ards Rugby undertook a sponsored charity event on the coastal path from Holywood to Donaghadee. The challenge was to commemorate the sad loss, to cancer, in October 2010 of their former coach and dear friend Francois Beukes.

On Saturday the 31st August, the club welcomed 12 year old Aodhan Brady and his family as guests of honour to the pre-match lunch, before the first league fixture of the season against Lurgan RFC.

Now two years into remission, Aodhan received the cheque for £1685, on behalf of the Cancer Fund For Children. He and his family have enjoyed the care and respite provided by Daisy Lodge, the CFFC custom built centre near Newcastle, County Down.

The proceeds of the collection will go towards the building of a new centre in the west of Ireland. This will allow for families living with cancer to avail of the superb facilities of a Daisy Lodge closer to home.

The organiser of the event Colin McLean would like to thank all of those from Ards Rugby who took part and also those who donated so generously to the charity.
Share via
FacebookTwitter
https://www.pitchero.com/clubs
Recent news