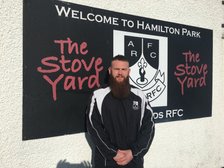 Although hailing from Bangor, Nathan played his youth rugby at Ards as there was no youth rugby sections at any of the other local clubs.

Nathan progressed from Youth Rugby to senior rugby at Ards but his playing career was cut short due to injury.

Nathan's rugby career has now gone full circle with his appointment as Ards Rugby's CCRO and he considers himself very lucky to now have the opportunity to represent Ards Rugby and Ulster Rugby in our local schools and introducing boys & girls to rugby.

Hopefully these boys & girls will follow Nathan's example by coming to the home of Ards Rugby at Hamilton Park for the next step in their introduction to rugby.

Any school in the Ards area is welcome to contact Nathan for further details: 07464 720870