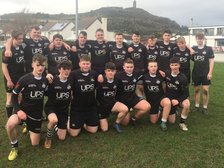 This has been an indifferent season for the U18s producing some great rugby and being really competitive when the players numbers are available.

Last Saturday was such a day with a 18 players available from the squad of 22 to take on the combined team of Ophir, Donaghadee, Lisburn & Larne.

Ards U18s Captain, Bailey Young led from the front throughout with some great carries from No8 and also when he moved to 2nd row; scoring a try in the process.

The forwards were powerful throughout with Jonas Massey & Cameron Uprichard dominating the breakdown, then being backed up by their pack in taking the ball forward, with good rucking by props Mitch Young & Brandon McCarten and fellow forwards Nathan Mallon, Paul Fitzsimons and subs Benji Bailie & Ethan Savage.

It was Massey who got the scoring started for Ards after 13mins when he finished off in the corner following a great turnover by centre Callum O'Hanlon.

In recent weeks 2nd row Cian Fitzsimmons has been a revelation, becoming more physical and having a real influence on the game; this week Cian scored a brace of tries.

Centre Callum O'Hanlon's power was evident for all to see, making his trademark linebreaks and step to great effect and scoring a superb try under the posts in the process.

Darragh Kelly continues to improve at centre alongside O'Hanlon, using his pace and strength.

The back 3 dealt with everything that the opposition kicked at them, winger Jonny Devenney was strong in both defence & attack; fullback Jamie Whitworth read the game well and hit the line at every opportunity. Sacha de Villenueve, a forward playing out of position showed his versatility on the wing and gained ground every time he got the ball.

Substitute winger Adam Rogan had the opportunity to show his pace when he linked well with fullback Whitworth only to be caught short of the opposition line.

All in all a very good performance by the U18s who now have to wait to see their final league position before knowing which Youth Cup competition they will play in and then await the draw to find out the opposition.

The season isn't over and training continues on Wednesday evenings at 7pm.