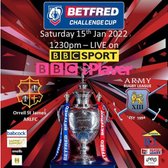 Our Challenge Cup Round 1 match against Orrell St James ARLFC will be streamed live on the BBC Sport website and app as well as on BBC iPlayer.

The popular and groundbreaking BBC streaming of the early rounds of the Betfred Challenge Cup will return when Orrell St James face the British Army at 1230pm on Saturday January 15.

And that will be followed in the Second Round two weeks later by the all-League 1 meeting between Rochdale Hornets – for whom 2022 marks the centenary of their only Challenge Cup triumph in 1922 – and Midlands Hurricanes, who will be playing their first competitive fixture since the rebranding of the club this winter.

That tie will be played on Sunday January 30, with a 1pm kick-off at the Crown Oil Arena – and like the First Round tie at Orrell, will be streamed live on BBC iPlayer and BBC Sport website and app.

The return of 28 community clubs and teams to the First Round of the Betfred Challenge Cup is one of the features of the 2022 competition, after their Covid-enforced exclusion in 2021.

The First and Second Round draws were conducted in December at Tottenham Hotspur Stadium, the venue for the Final on Saturday May 28, by the former Spurs captain Michael Dawson, and the Tottenham-born London Broncos wing Iliess Macani.

The British Army will be aiming for a repeat of their run to the Fourth Round when they last entered the Challenge Cup in 2020, and they battled to a hat-trick of hard-earned home wins at their Aldershot base against Oulton Raiders, Skirlaugh and Ince Rose Bridge, before losing at Rochdale Hornets.

However Orrell St James, who are one of many community clubs to have received substantial investment in their facilities from the CreatedBy Capital Grants Programme run jointly between the RFL and Rugby League World Cup 2021, will relish the opportunity to welcome the soldiers to their Bankes Avenue home on the outskirts of Wigan.

Rochdale Hornets, who were one of the 22 founding clubs of the Northern Union in 1895, secured their only Challenge Cup triumph in April 1922, beating Hull FC 10-9 at Headingley – seven years before the Final was played at Wembley for the first time.

Midlands Hurricanes will be a new name in Betfred League 1 in 2022, following fresh investment and an attempt to widen the appeal of the Coventry Bears club who have been flying the flag for Rugby League in the West Midlands since 1998.