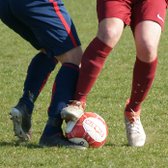 Eagles fall to a soft goal...

Arnold entertained local rivals Rainworth Miners Welfare who come into the game having lost their last three games. Surely the ideal time for Arnold to muster up a win and three desperately needed points as they try to avoid the ignominy of finishing bottom.

What was served up, by both sides, in a dismal first half did little to cheer the 69 spectators. Neither side took control at any point. Passes went astray, “moves” broke down, poorly executed free kicks and corners, balls simply hoofed up field and lots of running to little or no effect in the midfield. No surprise then that neither side created anything resembling a threat on goal. The only thing to note in that sea of dirge was a booking on 34 mins for Arnold’s captain, Knight.

Rainworth or more precisely Jepson for Rainworth took the game to Arnold early in the second half. He was a constant threat on the left wing, finding space outside Arnold’s full back, Drackett, then cutting in to shoot or crossing from wide. Three successive shots kept Ball in the Arnold goal on his toes. On 56 mins Bamford rounded Ball to his left but shot into the side netting. Inexplicably Rainworth eased off and Arnold started to get a foothold in the game but still couldn’t sustain pressure or create clear cut chances. Millward created an opportunity on 68 mins but shot low and wide from outside the box. A good run down the left by Hallam produced an excellent cross but no one was following in for Arnold. Millward then conjured up a cross come shot which skimmed off the top of the Rainworth cross bar. At this point Arnold were pressing forward with Wade, Millward and Bird combining well. But and seemingly with Arnold there’s always a but, on 70 mins, Bamford found Ethan Wiesztort inside the Arnold box and he shot pass Ball who was diving to his right. Arnold had plenty of cover but they didn’t close down or challenge the striker (0-1).

Rainworth buoyed by the goal upped their tempo and Jepson came back into the game, shooting wide from the right and having a cross blocked out for a corner. With three minutes to go a mistake by Welakoue, who miscued a clearance, gave Jepson another chance. His shot low down from the left was well saved by Ball. Arnold had a half chance in the final minute but Knights shot was deflected into the hands of Davies. The final minutes including 4 mins out stoppage time were played without further incident.

Rainworth edged a poor game and for their enterprise in the second half, just about deserved all 3 points. The substitution which brought Jepson into the game tipped the game in their favour. A deserved Man of the Match award (if there was one!) for livening up the game.

There is little to say about the Arnold performance. Same old. We are where we are because we are what we are!