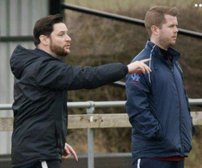 Today I am very sad to announce that I will be standing down as Manager of Arnold Town Football Club.

Having coached here last season and making the step up to 1st team manager this season, it goes without saying that the club does and forever will hold a very special place in my heart.

When I took the job on I did so with a high expectation of myself to bring good times back to the club for the supporters and everyone associated with the club. The goal was to use my experiences as a player and coach to educate and develop a team of young talented players in an attempt to have them successfully compete against every team in the league, unfortunately certain circumstances prevented me to take the club to the next level, this is through no fault of my own, or my players who, no matter what the result would work to the best of their abilities until the final whistle.

I firmly believe that during my tenure as manager, I have stabilised a club that previously struggled to get 10 players in shirts the season before, I always had a full squad available on match days, along with at least 22 players attending training every week which, from what I am told is more than a lot of teams at the top half of the table, so credit goes to my players for their professionalism, and willingness to want to learn!

With that being said I know that I can walk away from this football club with my head held high and knowing that the standards I set myself never once dropped.

I would like to place on record my thanks to Steve Holland (chairman), Kelvin Mushambi (player/assistant) and Pat Samba (player/coach) for their support, it was very much appreciated. Thank you to all of the players who represented the club, fought for the club and bought into what I aspired to achieve at this club, and the biggest thank you goes to the supporters, the heart and soul of this football club, your support was everlasting, and it will not be forgotten.

I wish you all the very best for the future.