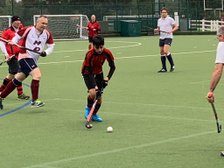 I know how Greta Thunberg feels. Getting a side out this week was on the scale of solving climate change. Having got to the club Sat am with 11, I left with 10. 'How dare they' Quite right, Greta...
Things improved from then and we had an awesome day. The oppo knew we might be short and were happy to help in the form of a very spritely 70-plus Peter who fit in perfectly at left wing. He later offered to guest for us any time!
Playing 10 against 11 it was uneventful for the first 15 minutes when Dangerous made an audacious dummy run which allowed Dev (one of our two debutante colts, Luke the other, very steady at the back) to dribble past 4 players and score from an acute angle! Holey Moley, what a goal!! Next thing we know, 2 up from smart play from a shortie by elder statesmen, Hopper and (converted by) Dangerous. We then missed a cavalcade of chances to put the game to rest... no names (but they're elder statesman)...
Second half, Iceman arrived and we were 11. The game eventually evened up and while Bobby was instructing our photographer, they got a goal back to make it interesting as we tired a bit and Hopper started hopping with his calf acting up.
Late on, nice advantage by Stevie allowed Iceman to live up to his nickname with a cool finish. 3-1, deserved win and a game played in terrific spirit and a fine advert for our friendly league.