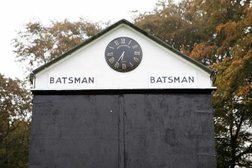 completely vanished in the sunshine on Saturday afternoon when without several first team regulars they were soundly beaten by seven wickets against second placed Sunderland at Ashbrooke Sports Club. The result sees the Mighty Acorns remain in third place with the race for championship title resting between leaders Washington or Sunderland with the campaign drawing to a close in four weeks time. Matty Storey top scored with 30 for Ashington who were bowled out for just 94. In reply, Callum Storey, Alex Storey and Mo Shinwari all took one wicket each but the home outfit – led by an unbeaten 60 from Dan Shurben - comfortably reached their target. Meanwhile at Langwell Crescent, Ashington seconds clash against Burnmoor seconds was cancelled without a ball being bowled due to the ground being unfit. *On Saturday, Ashington are at home to Crook with an earlier starting time of 12.30pm.
Share via
FacebookTwitter
https://www.pitchero.com/clubs
Recent news