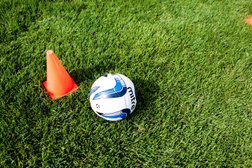 Back at Frampton again this time for a league cup match and a friendly league game.

Game 1 (Cup)
We have 3 other teams in our cup group so 6 matches to play and we got off to a good start.

It was the first chance of the game when Brayden put a through ball to Harry who got behind the defence to slot the ball home after just 2 minutes.
Things were quite even for the rest of the quarter but our defence was outstanding starting with Jack in goal who saved at least 3 one on ones in the first quarter.
Brayden and Will C stood really strong and are making a formidable force at the back.
Zach worked really hard also in defence and midfield.
The game stayed at 1-0 until midway into 3rd quarter after good work from Jake the ball landed at Will C feet and he smashed it home to make it 2-0.
We then had the first contender for Goal of the season when from his own half Will C struck the ball through Frampton players to put us 3-0 up.
Jack continued to make some great saves but he couldn`t stop a well taken own goal by Will C (No not a hat trick) but into his own net from a cross. I still have Jack down for a clean sheet.
It ended 3-1 to us and probably our best performance of the season so far.
Man of Match Will C
Coaches Man of Match Jack

Game 2
Jack continues in goal but we had a fresh team who again defensively were outstanding.
The first quarter ended at 0-0 and there was no sign of what was to come.
Soon into the second quarter we started to dominate and after good work from Noah he played a ball into Freddie who took the keeper on one on one to slot home to make it 1-0.
Just 5 minutes later another contender for goal of the season when after the ball bouced around in the penalty area in bounced to Will T who majestically chipped the keeper from 10 yards out to make it 2-0.
Into the 3rd quarter and with Wian and Sion tackling hard in defence and playing some great passes through to midfield we were creating more chances. Will added his 2nd quickly followed by Freddie also with his second to put us 4-0 up in just 3 minutes from the break.
Noah was working really hard in midfield and went close a couple of times but we scored again just before the end of the quarter with another goal and landing Will T his hat trick.
Into the last quarter our last goal came from Noah who bent a corner straight into the goal.
Man of the Match Will T
Coaches Men of Match Sion and Wian