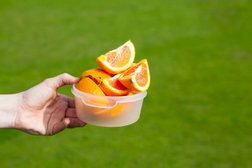 After a loss and a draw in our first 2 games we needed to work hard to get something out of this game and we really did.
We conceded early in the first quarter but worked really hard to contain a lively Gorsley team.
Chappers and Zach worked hard at the back and Jack was again strong in goal.
Harry and Jake were working well together and did create some chances and it was Jake that equalised just a minute before the break to level the scores at 1-1.
Noah and Freddie did well in midfield and broke down a lot of the Gorsley attacks but we conceded again after we allowed their striker to get in behind us. Something we need to work on.
Hayden on his debut looked threatening up front had his pace was causing Gorsley problems.
Into the Final quarter we created a few chances but were guilty of not getting our shots away, We tried walking the ball into the net.
Into the last 6 minutes things were extremely tense as you could here form our parents screams but it was Hayden that came to the rescue after getting in behind the defence and slotting the ball home form 6 yards out after good work from Zach and Chappers.
It ended 2-2 but was probably our best performance of the season.
Man of Match went to Jack.
Again as per under 8s game everyone deserved praise after a hard fought draw.
Share via
FacebookTwitter
https://www.pitchero.com/clubs
Recent news