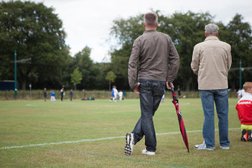 At least the weather held off for our game.

We knew it was going to be a tough game and there was nothing we could have done after a beautiful run and strike by Framptons Alfie.
We we under a lot of pressure but Jack made some good saves in goal and Will and Brayden were tackling well also.
Frampton scored again through Archie but we battles hard with Noah, Zac and Freddie in midfield to keep the score 0-2 end the end of the first quarter.
The second quarter was more even although Stan W did add a third for the away team.
Jake started to create some chances and went close a couple of times in the 3rd quarter and he combined well with Lacey. Harry also fought hard in midfiled to keep Frampton at bay.
Late on in the3rd quarter Stan P scored for Frampton from a penalty was was firstly saved by Jack but we were not quick enough to follow up.
We got a our goal 2 minutes later with a strike from 15 yds from Will C.
Into the last quarter we created more chances and had some one on ones with the keeper by but Frampton tackled well to deny us.
The last 5 minutes we tired and Frampton scored twice through Finlay and Stan W to make the final score 1-6.
We battled really well today and i was please we kept the score down.
Man of Match Jake
My Man of Match Brayden
Frampton Man of Match Alfie

See you all Tuesday at training 5.45pm