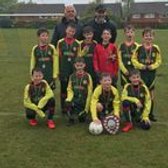 Into the second leg we went with a 4-0 lead from the home tie, but you could feel the tension in the Woodies supporters before the game.

Despite the horrible weather it was an attacking and exciting game played in good spirit by both teams.

The first 5 minutes was evenly matched but when Woodies were awarded a free kick 20 yards out, Ollie stepped up and launched it over the keeper and just under the bar to put the woodies 1-0 up.
For Hucclecote Ciaran and Sammy both went close but it was the Woodies that scored next in the 8th minute when Tyler pounced on a loose ball to stab it home to make it 2-0.
Conditions were really difficult for the goalkeepers and Casey made it 3-0 in the 11th minute.
For Hucclecote Jacob and Tim were putting in good tackles and Dan and Oscar started to win tackles in important positions.
In the Woodies defence Harry was working really hard as Hucclecote came more into the game. The midfield battle was a key area and Woodies captain Henry was winning the majority of his tackles and putting Tyler in down the right but he managed to hit the side netting 4 times.
Jenson was outstanding in goal for Hucclecote in the first half and they were rewarded when Harry pounced on al loose ball in the Woodies area to grab a goal in the 22nd minute to make the half time score 3-1 to the Woodies.
The second half was very even and both sides were playing great attacking football despite the conditions.
Hucclecote kept pressing and good defence by Dylan and probably playing his best game ever Jack helped the Woodies hang on to their lead, Joel and Ryan came on for the Woodies and continued to work hard but in the 41st minute Dylan thought he was playing rugby and patted the ball away with his hand and a penalty was given.
Ben got his hand to it but Hucclecotes George put to much power on it and the game was 3-2.
Hucclecote began to get on top and good work form Stan and Harry f kept the Woodies back in their half for long periods in the closing stages. Ethan and Oscar supported by Caleb played really well but the game ended 3-2 and Woodies came out 7-2 winners on aggregate.
After the game it was decided we will make this an annual event to close the season.
Man of match for Woodies was Jack
Man of match for Hucclecote was Jenson.