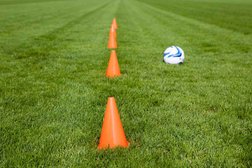 Under 8s match Report 1st May

Been a long time since we played and in the early exchanges it showed.

After 8 minutes we found ourselves 2-0 down and we looked all at sea.
We started to create chances and Noah and Ryan both went close.
Into the second quarter we made some changes and Will T came on making his debut Just a minute in and Frampton handballed it and Will T stepped up for the penalty which he struck really well but wide of the post but 2 minutes later he made amends when one on one with the Keeper and slotted the ball home to get us back into the game.
It stayed that way despite Harry having a good chance and us making more opportunities until the end of the 2nd quarter.
Into the 3rd and we conceded twice in 3 minutes to go 4-1 down. It was nearly 5-1 but the referee disallowed a Frampton goal and after some confusion we took free kick from half way line and the supporters thought we were 5-1 down but the goal was disallowed.
We then struck twice When after good work from Brayden and Ben , Chappers got loose and scored twice in 3 minutes to make it 3-4 and Harry Pounced on a loose ball just 2 minutes after that to make it 4-4.
Into the final quarter and we worked hard in midfield with Freddie and Ben making come good challenges and Jack made 2 really good saves in goal . Ryan moved into Defence and looked more comfortable ,however we conceded again but Freddie snuck into to level it again.
The game was wide open in the closing stages we conceded one more time but Chappers had time to get another and land his hat trick.
Jack had a good game in goal Brayden was outstanding in defence. Noah and Harry tacled well in Midfield. Ryan made some great stops in defence along with Ben .
Freddie and Will T both scored on their debut.
A really great game.
Chappers got man of the match .