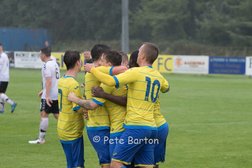 Yellows in 7th Heaven against Mossley

Saturday saw an historic win for The Yellows as they progressed to the Second Qualifying round of the Emirates FA Cup for the first time in the club’s history. Ashton ran out 7-2 winners against Mossley F.C of the Evo-Stik North at a rain-soaked Brocstedes Park.
The game could not have started any better for the home side as they took the lead as early as the second minute. Adam Gilchrist, returning to the squad after holiday, picked up the ball on the edge of the box. Having cut inside he unleashed an unstoppable left foot shot that nestled in to the top corner.
To their credit the away side stepped up a gear straight away and controlled much of the ball with the yellows being wasteful in possession and not keeping the ball as they had done so well in previous games. However, Ashton were always dangerous on the break and in-form striker Isaac Kusaloka looked a menacing threat. It was the aforementioned who broke clear after a great through ball from Gilchrist only to shoot straight at The Lilywhites ‘Keeper and then again following the rebound.
It was another wake-up call Mossley required and after constant pressure and two magnificent saves from Martin Pearson in the home goal they forced an equaliser. A corner from the left was swung in and the official on the far side saw an infringement; awarding a penalty of which the Mossley captain dispatched. Whether or not the away side thought they would then go on and win the game only they will know but home side had other ideas.
Ashton broke down the left hand side and the ball found its way to Gilchrist just inside the box. He calmly took the ball down on his chest and rifled the ball under Flynn to send the home support crazy. Better was to come though before the half finished as Ashton were to get their third goal of the match only two minutes later. The tireless Danny Regan played the ball in behind the Mossley defence, Kusaloka collected the ball and was going away from goal only to be brought down by ‘Keeper Flynn. Joel Brownhill sent an unstoppable penalty into the corner.
Mossley came out in the second half and once again controlled possession moving the ball quickly and working the well organised home defence with every attack. It took only five minutes to get the lifeline they were looking for and it came from a well-directed shot that went in off the post from Mossley number 9, Keogh. Game on, as they say.
It was at this point where Ashton decided they were not letting the game slip as easily as the higher league opposition would have wanted and it was them who were to score their fourth goal of the match. Howard went down the left-hand side and crossed beautifully for Sam Bailey to head home. This goal seemed to knock the away side and Ashton were to go on and ad a further three.
Ashton’s counter attacking play was excellent and a 76th minute through ball found Kusaloka who rounded the advancing ‘Keeper and slotted into the empty net. The game got the finish the home crowd wanted as Gilchrist scored his third goal of the game. Once again, it was Kusaloka who found space in the channel, unselfishly squaring the ball to his striking partner who couldn’t miss from six-yards out. To rub further salt into the wound Kusaloka himself added a seventh of the game in the 90th minute.
Lots of fantastic performances on the day and the whole squad were true heros. A job truly well-done! Ashton’s attention will now turn to Monday’s cup draw to find out their opponents for the next round.
Share via
FacebookTwitter
https://www.pitchero.com/clubs
Recent news