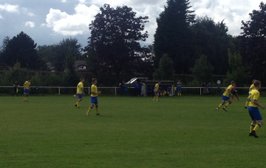 Ashton Athletic 18's off to a great start

The young yellows started slowly with Taylor, George and Kieran all starting. With a slow start Altrincham started on the front foot but were unable to break down a stubborn defence marshalled by Ryan Smith. A stalemate in the first 30 minutes as neither team could get a foot hold in the game. The introduction of Leiden McClean into midfield seemed to inject some tempo and urgency into an Ashton midfield but they were still unable to force any clear cut chances with both defences dominating the game in tricky windy conditions. A stalemate at HT 0-0.

The 2nd half saw the introduction of Alex McKenzie, Keelan McCabe, Scott Lawrence and Michael Hurst who made an immediate effect as the 2nd half got underway with Ashton taking the initiative, retaining possession better and stretching the two Altrincham centre backs who gave little away all day, and were certainly candidates for Altrincham 's man of the match. Several times Taylor, Sam and Keelan got in behind the Altrincham full backs and put several balls across the 6 yard box but Ashton were unable to get on the end of them to get that vital first goal.

Altrincham were dangerous on the break with pace down either wings, and from an Ashton corner Altrincham broke with pace, and a ball into the Ashton box caused the Ashton defence confusion, and what appeared to be a collision by two players without the ball resulted in a penalty to Altrincham on 78 minutes. A brilliant save by Lewis Goulding down to his left in the Ashton goal kept the game level. A now determined young yellows finished the last 10 minutes the stronger team and forced several half chances. The deadlock was broken on 85 minutes when a good move from the young yellows down the right saw the ball pulled back to Dec McLoughlin on the edge of the box who calmly slotted the ball into the bottom corner. 0-1. Altrincham pushed an extra man upfront for the last 5 minutes but couldn't break down a determined Ashton back four. It was Alex McKenzie who could of made it 2 on the break for the yellows as he got one on one with the Altrincham centre half who appeared beaten but Alex just got the ball caught under his feet as he advanced on goal. Altrincham continued to go long into the Ashton box but the Ashton back four were first to everything. FT 0-1. A deserved win for the yellows and great start to their league campaign for the young squad. Well done boys.