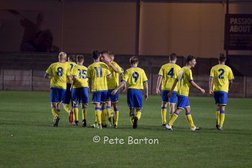 Top quality goals see the Young Yellows into the next round

Ashton Athletic faced a tough fixture away to Burscough in the first round of the FA Youth Cup.
Indeed the first half proved to be a great battle with no quarter given, both sides matching each other in effort and commitment.

Ashton always looked the more likely to score as they created the better chances but our luck seemed to be out in front of goal.
The defence looked solid and limited the lively Burscough strikers to nothing but half chances in front of goal and Matt Reid and Aaron Simpson were in control at the centre of midfield.
Sam Oyeini and Harry Johnson worked tirelessly down the flanks and it only looked a matter of time before Ashton would take the lead.
But against the run of play, Burscough were awarded a penalty! Their striker running through unchallenged was left one on one with our keeper Lewis Goulding. It was difficult to make out from the sidelines but the referee deemed Goulding brought down the Burscough striker and the resulting penalty was dispatched into the bottom right corner. 1-0 to the home side.
Still we were playing the better football but not quite making the right decisions in the final third and the score remained at 1 nil until half time.
It was clear that with a bit of patience we would get back into the game and so it proved.
The lads came out blazing and were even more dominant right from the start of the second half.
The equaliser came as Taylor Cain moved out to the right and was a constant threat with his pace. He flew down the wing cutting inside and slotted past the keeper to make it 1-1. A great finish.
Soon afterwards he made it 2 with a looping header which gave the keeper no chance, the score now Burscough 1 Ashton Athletic 2.
Rather than sitting back on their lead Ashton piled on the pressure and began to take Burscough apart. Great football all over the pitch created chance after chance.
Another brilliant move saw the ball played out to Harry Johnson on the left who beat his man, passed inside to Matt Reid, who span round playing it into Keelan McCabe, who then rolled it into the path of Dec McLoughlin who side footed it right into the corner of the net. A superb team goal from a side on top of their game.
And the very best was saved until the last and it was well worth the wait!
Keelan McCabe received the ball all of 25 or 30 yards out with his back to goal, flicked the ball into the air, spinning round and hitting a volley that sailed right over the keepers head and smashed into the back of the net. Wow! James Rodriguez of Columbia has got nothing on Keelan McCabe. It was that good! What a stunning strike to round off a brilliant performance by all the squad.
The lads saw the rest of the game out and to be fair could have scored more.
Man of the match was shared between Matt Reid and Keelan McCabe.
Next round the Young Yellows take on the winners of Mossley v Colne in the week commencing 19th of September.
Well done to all concerned. A great game to watch.