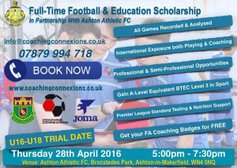 The Yellows hit for 5 by Chester

After a fantastic start to the season with wins over Altrincham and Burscough the young yellows were brought back to earth with a bump and defeat to Youth Alliance champions Chester City.

It would be fair to say that if anything could go wrong it all happened during this game, and probably a game to forget if possible. A slow start for the youth team saw Chester opening the scoring for a deserved lead on 10 mins. A wake up call saw the yellows on the front foot taking the game to Chester. Johnson and Cain were a constant threat down either wing for Ashton but despite numerous chances the yellows could not draw level. Poor finishing, keeper having a blinder, a bit of composure, the game had it all. That said Chester defended well but it would be fair to say Ashton deserved to be on level terms. Football as they say can be a cruel game. That was certainly the case on 35 minutes when Chester were awarded a dubious penalty, which appeared against the run of play with Ashton looking more likely to get an equaliser. From a corner the Chester centre half clearly looked like he had both hands in Lawrence's back as they challenged for the ball. Falling forward Lawrence clearly handled the ball. What looked like a free kick to Ashton caught everybody buy surprise apart from the referee who awarded a penalty to Chester. 2-0.

Rattled by the decision the young inexperienced squad were caught on the break with Chester making it 3-0 on half time. Ashton certainly weren't at their best throughout the 1st half. Their crisp passing and organisation which everybody is accustomed to wasn't there today with several key players below par. Credit to Chester as they punished Ashton's mistakes and were clinical on the break. Not the best half but a real kick in the teeth for Ashton who didn't really deserve to be down 3-0 at half time on the balance of play.

Ashton came out in the 2nd half in determined mood. Trying to get forward in numbers Ashton were sloppy and caught in possession in their own half again. A bit of individual quality from Chester's Brown robbing Ashton of possession before smashing the ball from 20 yards with a great strike into the top corner on 50 mins. 4-0

A virtually impossible task now for the young yellows against a buoyant Chester. Several injuries saw Ashton make a number of changes, which if anything made Ashton's job even harder as they looked further disjointed. A unusual keeper error added to Ashton's woe's and saw Chester make it 5 with 10 minutes left. FT 5-0.

Not a great day, certainly not a game that the yellows deserved anything from but were a little unlucky to go down by 5. An usual performance and defeat, but it goes down as the groups biggest defeat in their long association together through the age groups. That said a good learning curve at this level for the squad, which I'm sure they will bounce back from. As well as a disappointing day also a lot of positives to take from the game with several lads getting a feel for the youth alliance.

Credit to Callum and his talented Chester squad who were clinical on the day and were fully deserving of all 3 points.

On a more positive note 8 of the youth team represented our development squad on Thursday night in the Lancashire Galaxy league in an away fixture at AFC Fylde. A difficult 1st half saw the yellows happy to go in at half time 0-0. A much better 2nd half saw goals from either side finishing 2-2. Congratulations to Luke Evans as he took charge of the development team for the first time with the assistance of Brian Reid. Well done boys! From everybody involved with the youth team we welcome Luke and look forward to working with him.

The youth team have the chance to bounce back with another tough game against Skem Utd on Sunday 11th Sept. 1430 kick off at Skem Utd.