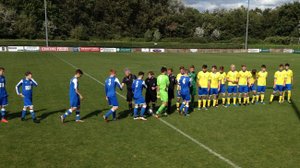 Ashton Athletic 18's got off to a good start in this North West Youth Alliance league game, scoring after 11 mins. Harry Johnson played a through ball right into the path of Matty Reid on the edge of the box, who fired a shot across the keeper, beating him in his bottom right corner.
Ashton were looking good at this point but as time went on were guilty of giving the ball away too cheaply.
Skelmersdale took advantage of this and got back into the game, the shot going in off the bar to make it 1-1.
Both teams worked hard but the score remained level at half time.
In the second half the game continued to be scrappy with both defences on top. The few chances that came around at both ends were missed and the game looked to be heading for a draw.
That was until the 85th minute when Alex Mackenzie finished superbly from a great ball from Aaron Simpson. 2-1 to Ashton.
Skem piled on the pressure in the hope of a late equaliser. Then the home side, desperate for possession, gave away a cheap free kick in our half. Centre back Ryan Smith, who was excellent all game, hit a great diagonal ball right into the path of Harry Johnson. Johnson beat two defenders and slotted home past the oncoming keeper. 3-1 to Ashton.
It was only a matter of seconds from the restart before the ref blew his whistle for full time
Great result for the young Yellows in a difficult away fixture to take all 3 points.
There were two bookings in the game, one for Dec McLoughlin, the other Aaron Simpson.
Man of the Match was Scott Lawrence for an excellent performance in defence.
Next game is at home to Warrington Town Youth - Sunday 18th Sept. k.o. 14:30
Share via
FacebookTwitter
https://www.pitchero.com/clubs
Recent news