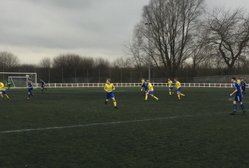 Despite a superb hat-trick from Dec McLoughlin Ashton Athletic went down 5-3 to the league leaders.

The Yellows took the lead in the first half thanks to an excellent run and shot by McLoughlin and indeed were the best team in the opening half.

Curzon had most of the luck throughout the game and scored 3 fortunate goals from the 5 they did take.

McLoughlin also scored a penalty after being brought down and a free kick from the edge of the box but it was too late to pull back the advantage taken by the home side.

Ashton Athletic Man of the Match was Matt Reid.