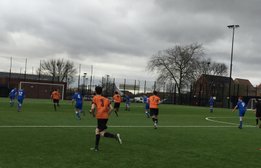 18's back on track with convincing win

After last weeks disappointing game against Southport the 18's looked a different side as they completely outclassed a Prescot side, who have had some good results against the Yellows in the past.
Against the run of play Prescot did take the lead but within minutes the scores were level thanks to a superb free kick from Matt Reid, curling the ball over the wall and into the top corner of the net.
A nasty head injury to centre back Lucas Picton saw Mike Hurst come back into the team and perform superbly throughout, earning him Man of the Match at the end of the game.
Back to the goals.
Next up we saw Dec McLoughlin on a mazy run, beating three men only to be brought down as he entered the box. McLoughlin got back up and slotted the penalty, sending the keeper the wrong way to make it 2-1 to Ashton.
After the break the hard working Sam Oyeniyi got his just desserts scoring with the ball going in off the post.
The fourth was another cracker from Matt Reid, driving forward he let fly and the ball sailed into the top corner, giving the keeper no chance.
The icing on the cake was a superb move from the lads, a great ball from Oyeniyi to McLoughlin saw him score his second and make it 5-1 to the Yellows.
Ashton looked comfortable throughout the game and indeed could have scored more but with 3 points in the bag they now move up to fourth in the league with 8 games still to play.
An excellent result and a quality performance from the whole squad.