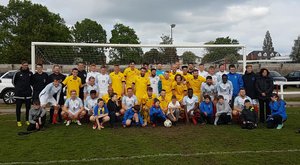 Huge, huge thanks to all whom made todays game... Even bigger thanks to those whom juggled and responded to my last minute call ups, and whom even nearly managed to pull off a shock victory.. Its a hell of a juggle to pull these games off and you have my heart felt thanks for giving up your time to support ❤

The Celeb XI set up well with Ashton Town's Dempsey and Duke linking up with experienced semi pro Matty German, and all three conducting the play. Luke Jerdy from Hollyoaks really should have opened the scoring for the XI, along with German who had a great chance in the first half.

The Celeb side went on to hit the post and crossbar in the game, and Emmerdale's Joe Warren Plant was a decent threat out wide with his youth and pace. At the other end of the age scale, Ex Liverpool Howard Gayle also got to make an appearance at the ripe old age of 60 !

England, whom had a squad of 21 to choose from eventually took their chances and went two up, when a draw could have been a fair result.

The Celeb XI did have a chance to get one back near the end, with Ashton Town's James Sigsworth turning the England full back inside and out with great trickery only to be brought down in the box, unfortunately though the Sigworths penalty was tame, and England got the victory, and the clean sheet.

Monday its over to a full Ashton Town XI to test the three lions in their northern training camp prior to heading to Crete for the Euro's at the end of the month.