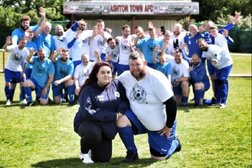 Hundreds of Wiganers came together to help raise funds for the Claire House Children’s Hospice at Ashton Town last Sunday.

Keith Peters and Rebecca Roberts organised a charity fun-day to pay tribute to their late son Freddie and thank the hospice that helped them come to terms with their loss.

The staff at Claire House provided invaluable support for the family when Freddie died.

And the ‘Football for Freddie and Friends’ charity event was a huge success as hundreds of pounds were raised for the Liverpool-based hospice.

The charity showpiece painted a big smile on everybody’s faces at Ashton Town during the bank-holiday weekend.

In addition to enjoying the stalls, raffles and tombalas inside the clubhouse, spectators were treated to two highly-entertaining football matches at the newly named Scott Rees and Co Stadium.

Ashton Town’s Under 16 Girls side begun the football and set a high standard in their curtain-raiser match against a side from Manchester before the Wigan Athletic Fans team ran out as 6-4 winners against For Our Lost Little Ones FC.

Wigan Fans Team opened the scoring in the first-half when Ryan Wood’s inviting cross forced Danny Whitehead to head into his own goal.

They soon doubled their lead when Lewis Gildart used his lightening pace to round the goalkeeper and slot home.

Wood scored from the spot to make it 3-0 after Gildart was clattered inside the area by the onrushing goalkeeper Andrew Barclay.

The 23-year-old dedicated his well-taken goal to his late cousin that passed away earlier this month.

Despite falling 3-0 behind, Follo FC came back fighting and were given a lifeline when Ashton Town manager David Dempsey cannoned his effort home on the hour mark from a tight angle.

Spirits were temporarily lifted for the Tameside-based team, but Wigan Fans Team immediately restored their three-goal cushion when Gildart scored his second after a through ball from Ross Gregory created the chance out of nothing.

But straight from kick-off, Dempsey scored an outrageous David Beckham-esque lob from the halfway line to cut the deficit to 4-2.

The quick-fire goals kept on coming in this 10-goal thriller as Lewis bagged his brace with a thumping half-volley from the edge of the area.

The match, however, came to a very fitting end as Peters emotionally scored the final goal of the day from the penalty spot.

At the end of the charity bonanza, both teams united for a group photo and Keith proudly handed the Fans Team with the inaugural Freddie Peters memorial trophy.

“What an amazing day that was," he said."It’s a day I’ll remember for the rest of my life, it was so special.

"I managed to score to for Freddie which meant the world.

"I’ve got so many thank-you’s to say as I honestly couldn’t have done this event without the support of everybody. I’d love to thank Freddie’s mum Rebecca who smashed it, and my family and the best team-mates around, Follo FC, for all their help.

"It was a really exciting game and I hope the spectators enjoyed it.

"We’ll be back next year with a rematch against the Wigan Fans Team. We’ll let them enjoy today, but next year, we’re coming back stronger to win that trophy!”