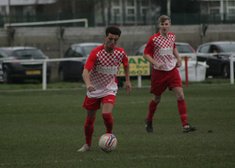 HONOURS EVEN AT EDGE GREEN STREET

The visitors took a 1-0 lead into the half-time interval thanks to a strike from John-Paul Stanway on the half hour mark, but Town's second half response was emphatic.

Manager John Brownrigg made a double attacking substitution and the results were instant, as winger Ste Milne rifled home the equaliser from 20 yards.

Holker were soon reduced to ten after one of their players received a second yellow card for diving, and Ashton immediately took advantage.

Centre forward Sean Robinson, who recently returned from a four month tour of South America, was on hand to finish well and put Ashton into the lead.

And the three points looked to be secure until the 89th minute, when the away side won a free-kick on the edge of the Town area after pushing for an equaliser.

Former Wigan Athletic striker Lee Ashcroft stepped up and perfectly placed the dead ball over the six man wall into the top corner, rescuing a point for the away side in the process.

Ashton Town are in action again next Tuesday, when they host Hanley Town for an 8pm kick-off in the NWCFL First Division.