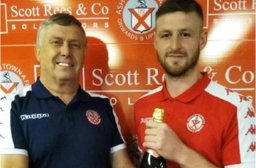 The pacey striker opened the scoring in the 17th minute when he reacted the quickest after John Edgerton’s shot could only be parried out by Daisy Hill ‘keeper Dean Williams.

He picked up in the ball in a wide position on the left, and his shot evaded Williams and found the bottom corner.

Although Ashton Town had been on the front foot for large parts of the first-half, Daisy Hill were handed a lifeline when the referee awarded the visitors a controversial penalty.

It appeared that Ashton Town full-back Edgerton and the Daisy Hill attacker just collided after they both missed the ball in the penalty area- but the referee pointed to the spot.

Thankfully for David Dempsey‘s side, Ben Purdham produced a brilliant save to keep Town’s two-goal cushion in tact.

The penalty save proved to be a key turning point, as Glass completed his hat-trick in the 38th minute after he rounded the onrushing Williams and guided the ball home.

Town rode their luck in the second-half as Daisy Hill lacked their usual potency in-front of goal and couldn’t find the scoresheet.