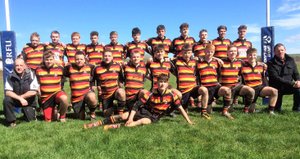 The seconds hosted Burnage 3s on Saturday in a match which saw Brandon play his first ever game of rugby under the watchful eye of Graham Leighton and a good sized crowd who were entertained by the best and closest game for the twos this season, both teams had full squads and the use of rolling subs was probably used as much as humanly possible , maybe this was the intensity of the game in which the lead changed 6 times .
Ashton fielded 3 Colts Aron Lancaster , Louis Worthington and Jack Pietsch all showed great class in their performances with a try each for Louis and Jack the latter clinched the game and was worthy of doing so with an inside step and great angle for the line against a very strong defence.
Raoul returned with a try just stretching for the line and Mez also dived over for the first try with a good game at scrum half linking well with Lancaster at 10. Credit should go to the visitors and the ref both had good games and it made for a good contest. Inspector Gadget retains his old school wing play and is always a pleasure to watch, as was the whole team well played all.
Sunday was a good day for rugby mild and dry and who knows how many of them we will have this month
Ashton U16s 17-34 Aldwinians U16s

Two tries and a conversion for Tom Ainsworth and a try for Matt Cope.

Ashton U13s v Aldwinians U13s report awaited from Ricky although I believe it was a win for the visitors.

A couple of late withdrawals left Ashton low on numbers but Bury were more than happy to play a mixed game with all players giving it a good go, some much improved rucking in the final third.

The U7/8s also traveled to Glossop, sporting their new he man shirts, very smart and another good game, tries to numerous to count as usual.

Ashton Colts had a training session in preparation for the Tarleton game, good on them . Sunday training for my Colts ( pictured after a cup win over Sefton some year ago) was a non starter, so this shows their dedication well done lads, keep up the good work.

Thanks as ever to all who made it happen.