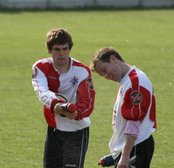 With 2010 approaching, another decade has been and gone at Ashton United, and it's been another rollercoaster of a ride at Hurst Cross. There have been many notable highs including the club's first foray into the UniBond League Premier Division, the trio of Manchester Premier Cup wins in 2001, 2002 and 2003 and the club becoming inaugural members of the first ever Conference North Division line-up. In this article Ashtonutd.com takes a look back at the last 10 years in our "Review of the Decade: 2000-2009'.

Having ended 1999/2000 with a slightly disappointing 14th spot finish in the NPL first division, 2000/01 saw Ashton United reclaim (having missed out on promotion by just one point) that third place that they had by then made their own in the NPL's second tier. Fortunately by 2002 the play-offs had been introduced (after again missing out by just a single digit) and United defeated Bamber Bridge 2-1 in a memorable play-off final to secure their place in the Premier Division for the first time in their history.

The Robins made history in another way that season thanks to a 60 yard wonder strike from midfielder Gareth Morris. The goal, which came after just 4 seconds of Ashton's FA Cup First Qualifying Round tie against Skelmersdale United, is believed to be the fastest in the 125 plus year history of the competition.

Ashton's first Premier Division season was as expected, some good, some bad and some ugly moments and ultimately a 16th placed finish representing lower mid-table and survival at the first attempt. A third straight Manchester Premier Cup was also secured the same year at the end of 2003, adding to the successes in that competition in 2001 and 2002.

2003/04 had the added carrot of the opportunity to progress to the Conference North, which was to be introduced at the start of the following season. 'All' United had to do was finish in the top 13 to make the newly created division, but sadly on the last day of the season, and for the first time all season, they dropped into 14th and again had to face the lottery of the play-offs. After losing out in the play-off final to Bradford Park Avenue, Telford United's demise saw Ashton make the inaugural Conference North Season regardless, but with little time left to build a team capable of competing in this new league.

Relegation duly followed in 2005 (only the third in the club's history), but the season was not without its highlights - the humbling of eventual champions Southport being one and derby day victory over Droylsden being another. This season also proved to be the final bow for one of Ashton's most successful and respected managers, Mr Gerry Quinn, who was relieved of command early in the campaign. Andy Johnston and later Paul Futcher also tried to keep United up without success.

Futcher began 2005/06 as United manager and brought Scott Green to the club as a player, who before the end of the campaign would succeed him in the managerial hotseat. As another relegation battle beckoned Futcher resigned after a woeful performance against Prescot Cables, and Green managed to secure enough points for a 'comfortable' 15th place finish.

2006/07 was another rollercoaster of a ride and culminated in the beginning of the stewardship of current manager Danny Johnson, and the stabalising influence the club desperately needed after so many changes in the manager's chair. Green's policy of using young players had mixed results, and although nowhere near the top teams in the league Ashton looked unlikely to get dragged into a relegation battle. However all that changed when Green spectacularly resigned on the morning of the President's Cup semi-final at Guiseley, and a run of defeats left the club perilously close to a return to the first division. Cue the appointment of Johnson and with the help of Danny Jones who led the team in those fateful last few games of the season, United somehow performed the great escape.

07/08 saw Johnson begin to build his own team and in one of the tightest NPL's for many years a last gasp Gareth Richards winner at Matlock saw Ashton leapfrog several sides on the last day to finish in 10th - their highest finish in the NPL Premier. The goal was all the more appropriate given that Gareth had been badly hurt whilst at a wedding abroad, and was only just returning to first team action.

United had the reputation of a top half team to live up to in 2008/09, and did themselves justice with some excellent early season form seeing the club in top spot at one point, but a run of injuries ended any play-off ambitions. Again there were some memorable matches - over 1500 crammed into Hurst Cross to see the Robins beat FC United in their first ever competitive match against each other on Boxing Day, the winner ironically scored by an ex-Manchester United trainee Callum Flanagan. Ninth spot represented more improvement in a very tough league, and an appropriate way to celebrate 130 years since the foundation of the club.

Budget cuts hit Ashton hard as the recession took hold at the start of the 09/10 season, but manager Danny Johnson and virtually all of the playing staff stayed loyal to the cause and were soon setting the league on fire as they rose to top spot. However a run of six straight defeats seemed to indicate that the decade would end on a low note but it wouldn't be Ashton United without a twist to the tale, and a 4-0 rampage against AFC Fylde in the UniBond League Challenge Cup meant that Ashton's final memories of 2009 would be happy ones.